Graphic design is something that is all around us, especially in this day and age. We cannot ignore it even if we wanted to. When we look around at things like paper flyers, television adverts, billboards in the streets, social media sites, websites, and even businesses logos, they do have elements of graphic design on them. The question now is what is the definition of graphic design? This is an art where designs are used to show information.

Many people out there especially historians say that graphic design goes as far back as 38,000 BCE when the cavemen and women were around. They painted their cave with art but the graphic design from back then is way different from what we are familiar with today. To understand it fully, this article will look at how graphic design became what it is today with a trip down memory lane. 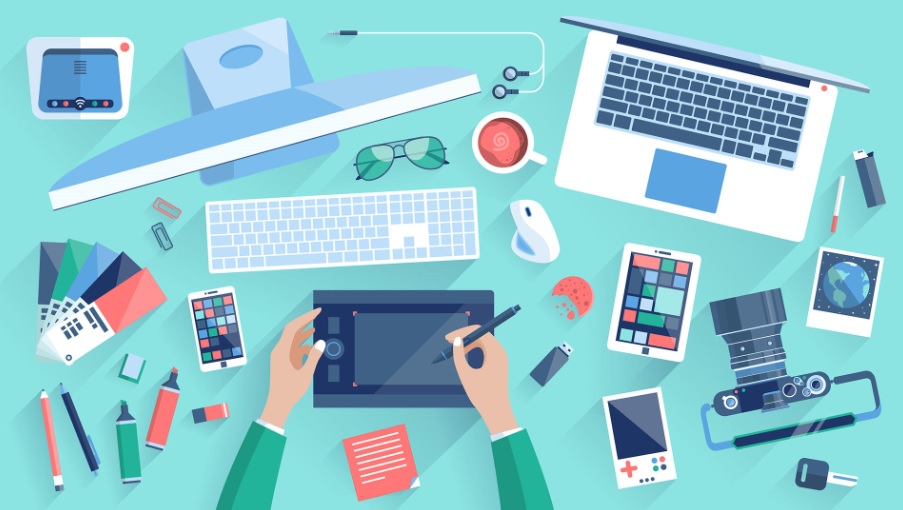 Lithography and the industrial revolution came around in the 1760s and this introduced new technology to the world as far as manufacturing is concerned. People began to be more innovative and started finding new and effective ways to increase their production and this included design.

Created by a man called Alois Senefelder, the term lithography means printing a design on metal or stone using ink and then moving onto a piece of paper. This made people back then come up with some amazing posters to decorate their homes, press releases, and political events.

While a lot of progress was made throughout the 1800s and early 1900s, it wasn’t until 1947 when the world truly saw the direction graphic design was heading through corporate logos. A man by the name of Paul Rand changed the game when he reshaped the logos of some of American’s big organizations.

The likes of America Express, UPS, IBM, and ABC all contacted Paul Rand and asked him to redesign their logos. He did a fantastic job and some of his work is clearly seen today in 2019. Take the IBM logo, for example, he created it for them in 1970, and they still use the same logo to this very day.

By the time the 20th century rolled around, people in the industry ditched the use of paintbrushes and pencils that were popular in the 60s, 70s and the 80s for digital tools. This meant graphic designs were performed with the help of computers. One digital tool that made the graphic design very easy is called PhotoShop.

This is a software that was introduced to the world in 1990 and it allowed people to edit their graphic with ease. The popularity of this platform gave birth to many other programs like Microsoft Paint. Microsoft Paint and Photoshop are all easily accessible to people who are massive fans of art and enjoy editing pictures across the world when they purchase a computer or laptop.

With the history out the way, it is time to look at how graphic design is seen in 2019. Graphic design is more important in our everyday lives now than it was 50 or 60 years ago because we are created by them on websites, social media platforms as well as phone apps.

In the business world especially, organizations across the globe use graphic design to expand their brand name and connect with their target audience. Everywhere we look or turn, the content that surrounds us is full of infographics. Designers are going out of their way to create designs that are eye-catching in order to get our attention especially when marketing is involved.

A team of graphic designers from AdvancedWriters professional writing company states: “The future of graphic design is bright thanks to technology getting better and better each passing year. If technology carries on improving at the rate that it is at the moment, things can only get better not just for the current generate but the next generation of future graphic designers. They will have some of the best tools at their disposal that will make their lives easier. They will be able to discover new things while growing their personal experiences along the way.”

Graphic design is something that has been around for as long as man has been on earth and when a man has evolved, it has evolved too. It helped people get their messages across during the industrial revolution, helped major corporations in America come up with their logos and isn’t going anywhere any time soon thanks to platforms such as PhotoShop. Its popularity is helped by the fact that the world has gone digital. Gone are the days of using pencils and brushes. You can produce amazing designs in the comfort of your own home thanks to strong computers and laptops.